Shamelessly stolen from Michael over at It Rains… You Get Wet.

1 – A movie you love with a passion

Oldboy: saw it in a tiny – practically empty – 50-seater screen [Aberdeen, Belmont Cinema] and just fell in love right there. It’s got plot, style, direction, acting, editing, originality, and groundbreaking themes that the re-make probably hasn’t touched with a bargepole: I’m not rushing to watch it! Such a fine example of original, bold, and brave film-making.

2 – Movie you vow to never watch

Don’t think I would purposely decide to never watch a particular film on grounds that it’s potentially bad (I’ve sat though old propaganda films, terrible B-movies, outrageous exploitation films with no problems), but you’d be hard-pushed to convince me to watch the High School Musical movies, or any of those “he/she dies of cancer at the end” manipulative sob-fests.

3 – Movie that literally left you speechless

Children of Men: My friend Spencer and I literally walked home slack-jawed, glancing at each other occasionally and muttering phrases like “No way”, “Holy shit” and “Fuck me” for 20 minutes after we left the cinema. Unbelievable, powerful film-making, paired with groundbreaking technical precision that should be watched big, loud and uninterrupted.

City of God: usually to people that haven’t yet been swayed to world cinema yet. My DVD of this has been continuously whored out for the past 5 years. Actually, I don’t even know where it is any more… Poor Rocket! Take that acclaimed coming-of-age crime film Gomorrah, turn that son-bitch sideways, and stick it straight up your candy ass!

I try to catch as many Barry Pepper films as I can. For me, he’s one of American cinema’s unsung heroes, never the leading man, but always putting in a top shift, and connects with the audience so effortlessly. Jackie Chan too, although he’s done so many movies that it’s hard to keep tabs – and had a few ropy hollywood outings.

6 – Actor / Actress you don’t understand the appeal of

Zooey Deschanel: seems to have carved herself out as the go-to queen of the quirk. I cannot stand her cutesy, look at me, bug-eyed, big-fringed, dressed-like-a-tranny-from-the-1980s vibe. Arrested Development is Michael Cera’s get out of jail free card, or else he’d be cast off in the same boat.

See next question – LOL. Seriously, I’d love to sit down and have a few beers with Russell Crowe. Of all the egos, stars, and reported stories from behind the scenes, he’s been the most fun to follow through the years, and sounds like he’d be a great drinking buddy. It helps that he can act the pants off of most people too, at least when he puts his mind to it. 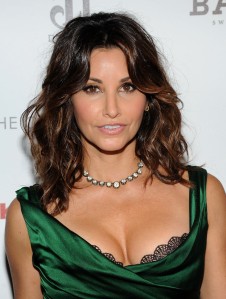 I have always exclusively reserved my Hollywood-wood for the lovely Gina Gershon (Those eyes! Those lips! That hair!) – she’s like an expensive whiskey that keeps getting better with age. Although recently I saw a few photos of Italian actress Sophia Loren and my life hasn’t been the same since. Too close to call. Maybe Lizzie Capplin, or Penelope Cruz. Toughest question on the list for sure.

The Good, The Bad & The Weird is as close to a ‘dream movie’ I’ve seen in real life. However, if I were a producer I would go for… Brian De Palma directing an international action-thriller with an ensemble including Javier Bardem, Jean Reno, Penelope Cruz, Barry Pepper, Moritz Bleibtreu, Monica Bellucci, Vincent Cassel – all in their prime.

When Raylan Givens (Timothy Olyphant) and Boyd Crowder (Walton Goggins) are in the same scene my telly, brain, and Marshall stiffy pretty much explode simultaneously. The back-and-forth banter between those two is some of the best-written TV out there, and the actor’s chemistry is sublime.

If I was living in a world where BASEketball or Death Race 2000 were actual sports I’d quit my job tomorrow. Being dropped into a Jean-Pierre Jeunet (Amelie, MicMacs, Delicatessen) or Luc Besson (Fifth Element, Adele Blanc Sec, Angel-A, Nikita, The Last Battle) would be wildly entertaining, although I know for a fact that this is going to change when Snow Crash is finally made – come on Hollywood, pull your finger out!

I think the 2000s is a tough decade to beat, so much emerging talent and superb movies. Probably helps that I spent most of the decade in front of a cinema screen.

Action; every single time. I like the odd chick-flick now and again – Just Like Heaven, Princess Bride, SATC – but even the Mrs prefers a good old action-film over the chick-flicks.

15 – Black and White or colour

Colour for the most part. I’m not particularly adverse to black and white – it has its merits – but I’ll take ‘modern cinema’ every time over the classics. Imagine watching films like Volver, Scott Pilgrim, The Fall, Lego Movie, Kill Bill and Survive Style 5+ in monochrome / B&W… no chance.

Trance: when an art heist goes wrong the only auctioneer who knows where a valuable painting is can’t remember what he did with it. Purposely or not, this is a fragmented mess of a film: it’s hard to know exactly what is past, present, hypnosis, and visions – making it frustrating to follow at times. The twist-o-rama finale in particular is both super-smart and hyper-ridiculous. If it’s one thing though, Trance is visually sumptuous; some parts feel like a technical demo reel – full of impressive techniques, colouring, imagery, and most scenes have some form of reflection / symmetry. Yet, no matter how much Boyle tarts this up, it still manages to feel like a TV drama for the most part; lots of talking, small locations, tight cast etc. There’s also a really, really, strange ‘hairy bush’ Vs ‘shaved pubes’ sub-plot. Trance is part cutting-edge super-styalised directorial flare, and part humdrum, but the shattered timeline and ambiguity of what you’re watching make it very hard to tune in to. I imagine this plays better with a 2nd viewing.

Standard night out for us Scottish people…

Brotherhood of the Wolf: a French knight and NATIVE AMERICAN WARRIOR (!!) investigate reportings of a murderous wolf-like beast in 1700s France. I can best describe this as a 1980s fantasy fanboy political aristocratic period drama ‘horror‘; with werewolves, camp comedy, bawdy action, and token European tits. Trying to cover this much ground, it’s simply far too weird and ridiculous for its own good. The acting is theatre at best, the plot is nothing short of batshit mental, there’s also lots of hammy slow mo, rubbish CGI, and a laughable bone-sword. The beautiful Monica Bellucci can’t even save this, as a tracking shot of her naked body morphs into a CGI woman-shaped mountain-scape… really!?!?! The film’s like a wholesale sized can of industrial strength WTF, focus grouped by the biggest nerds in the world – and I love geeky films.

I endured 45 minutes then skipped through the rest of the film, stopping at the action scenes only.

Alternative Plans: sat in the corner of my room – confused, angry and disoriented – bashing head against the wall, thinking why… why… why… why…

Black Swan: when a devoted ballet dancer finally gets featured in the lead role of Swan Lake she has to deal with all the pressures that drove her predecessor crazy. To get it out of the way, nobody does ‘descending into madness’ quite like Aranofsky – and this is no different in that you genuinely have no idea if what your seeing is real, unreal, paranoia, hallucinations, fantasy, or mental illness. The second half on the film in particular has some genuinely chilling and thrilling scenes. To begin with the camerawork feels awkward and unnecessary – walking shots behind the heads – but it works surprisingly well for most of the film – particularly when it starts spinning around the dancers. The film also uses SFX outstandingly, and wiping out the cameramen in the reflections gives the viewer a strange haunting sensation. The new-age classical soundtrack is nothing short of stunning. Although I wasn’t convinced by the first 40 minutes, seeing the complex relationships (mum, teacher, peer) develop is thoroughly enjoyable, particularly because the film always keeps you guessing. Cassel and the Hershey both give show-stopping performances, although they’re overshadowed by Portman who puts everything out there, and becomes the definition of fragile, slowly and believably transforming into a woman on the brink of madness. Don’t understand the big deal around theater walk outs – it’s definitely not for the prudish, but there’s nothing offensive here. Despite everything in front of the camera being golden, the real star is the man behind it, who gets everything pitch perfect and creates an absolutely stunning finale. Ballet’s never been this sexy and dramatic.

Doberman: follows cops, robbers, bent cops and transvestites entangled in a feud & bank robbery – although there’s only a few minutes spent in the bank. The film has a strange, over-exposed and grainy, look but remains slick and stylish throughout. There’s a ton of hyper violence culminating in the world’s worst facepalm, but it’s all pretty surreal as it’s based on a pulp comic. The script’s just as brutal and not very PC, mainly due to the transvestite / gay / fetish characters and general eccentric stereotypes. Also, what is it with directors treating Monica Belluci so roughly? Unfortunately, it lacks the depth, substance and story of similarly styled Besson / Tarantino films. Definitely a visual treat, but it’s a bit of a no-brainer and stays in-your-face from the very first frame. Style over substance.