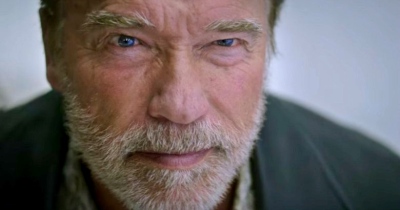 Aftermath [mild spoilers]: follows two men after a fatal airplane collision that changes their lives forever. The film starts with a relentlessly grim and drawn-out opening act in which both leads deal with the shock of their situation, frequently tipping over into forced melodrama; it’s all very burdensome and somber. Where the film really fails to deliver is after a 70 minute gloomy setup; the ‘climactic payoff’ is far too brief, and then we get a post-script ‘years later’ scene that you could see coming a mile off. Stylistically, the film is equally austere, with a grayed out colour palate; it starts at Christmas for no real reason than to crank up the sorrow-o-meter; and contains some rather clunky imagery & parallels between the leads’ lives. Strangely, the movie takes a powerful real-life story and changes core elements that ultimately lessens the story’s impact in the fictionalized movie version. I’m a huge Arnie fan – and think he’s a better actor than he’s generally given credit for – however this film asks a little too much of him: there are moments where you can see him struggle with the emotions. Scoot McNairy is rather good, but doesn’t get a lot of gears to change through. From the director of Bltiz (a solid police action/drama) the lack of action and tunneled focus on tragedy feels like a huge – but just-missed – leap. Aftermath is by no means a bad film, but it is a very heavy film about a very heavy subject that you’d need to be in a particular mood to watch.