American Reunion: the original gang head back to Great East Falls for their ‘Class of 99’ high school reunion, but will they be up to their same old antics? In a nutshell, it’s pretty obvious that the cast have struggled to shake off the image from the first few films (which were such a phenomenon at the time) and are only looking to make a bit of good cash again. In my books, Sean William Scott (Stifler) is the only one that’s done well – but even he’s still typecast! Being honest – although they’re all flatter than stamps – it is good to see everyone back on the screen again, and it’s even better when the smaller characters keep popping up: Shermanator, MILF guys, Nadia, Stiffler’s Mum, Jim’s dad etc etc. As before, the soundtrack is very punchy and pop-rock filled (with a nice encore from one of the original tunes), but has some of the most uninspired literal lyrics to match the scenes that I’ve ever seen. The story’s a bit of a mess; it feels like a bunch of random / funny scenes that loosely fit the tired ‘shaky friendship’ story arc. It’s all a bit business as usual, from the gratuitous boob / bum shots, slow motion scenes of hot babes being hot babes and plenty alcohol-fueled regrettable & misunderstood scenarios. I won’t lie, I laughed, lots so on a comedic level it’s better than expected, but overall it feels much safer than the original three. American Reunion is familiar territory (dick and poop gags), that will land well as a nostalgia piece for people like me that grew up on the first films; however, younger viewers will see this as a pretty weak effort, especially in the wake of films like Superbad, Pineapple Express, et al. 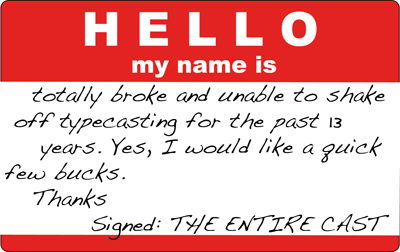 Alternative sticker, will be in the DVD extras