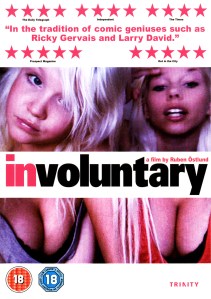 Involuntary: Swedish outing about five everyday people, that examines human behaviour. There are no ‘conventional’ shots in the film; the director opts for long and static/passive takes of legs, backs of heads or very wide group shots. It’s also book-ended by a camera stuck to an ambulance, just driving through nondescript streets. There are apparently five ‘stories’ in here, but they’re all so tedious that you’d get more entertainment from a trip to your local slaughterhouse. It’s so uninspired that it’s one of those films where the actor’s real names are also their character’s names. This is exactly the sort of ostentatious euro-drivel that gives ‘Arthouse’ a bad name. Yet this was Sweden’s 2008 Oscar entry. It’s sitting at 7.1 on IMDB, and 74 on Metacritic. WTF am I missing? Who enjoys watching films like this?

Like a sucker, I’d fallen for the oldest trick in the book: the DVD cover over-sold it. Ultra-misleading description; billed as a cringe/comedy citing Larry David/Ricky Gervais, but I didn’t smirk once. Ultra-misleading cover; four and five-star reviews, and two blonde Swedish girls with big tits (zoomed in on to be even bigger). Ultra-misleading rating; 18 rating DVD + boobs on the cover would normally mean the film has something worth watching – like a professional troll it’s only an 18 because you see a guy’s willy. This DVD can eat a platter of dicks.

Alternative Plans: After 30 mins I put it on 1.5 speed for a few mins (about ½ a scene), then 10x speeded it to the end to make sure I didn’t miss anything interesting – alas it didn’t look like I did.

Blow Out: a sound effects artist records a car accident, but finds himself in danger as he tries to blow the top on a cover-up. This film is nothing short of a directorial masterclass: the visuals are filthy rich, with dozens of brilliantly filmed & striking scenes. De Palma is truly a master of ‘the shot’ as he effortlessly throws in a barrage of intricate, flashy, techniques: 360 spinning, dolly shots, split-screens, dual-focus, playing with depth of field & perspective… he has technical flare and style to burn here. Travolta matches this with an intense portrayal of an investigative man-on-the-edge. The music and sound effects are great, until the end when a cheesy score dominates the picture. The plot is good, and backstory perfectly stitched through the movie, My favourite aspect is the horror movie tropes being poked fun at through the sub-plot, particularly at the start: the opening film-in-a-film scene, and his previous movies named ‘Bloodbath’, ‘Bloodbath 2’, ‘Bad day at Blood Beach’, ‘Bordello of Blood’… Blow Out is a rare example of directorial technique, story, action, and acting being massaged together perfectly to create something powerful, dramatic and iconic – it’s enviable how good this movie is. I can’t wait to re-visit this already.

Submarine: Oliver Tate just got his first girlfriend, right as his parents marriage begins to crumble – so he tries to give them a hand… For being a one-boy show, the central character’s great; despite being a little clichéd he’s good fun to watch, and his monologues / voiceovers are a solid way of pushing the story forward. The scriptwriting scores in two ways: the dialogue is offbeat yet manages to stay below the annoying radar; and the humour is so dry, deadpan and dark that the two elements really complement each other. For being his first time behind a camera, it’s strongly directed, and has some surprisingly cinematic moments – given that it is intentionally an indie-feeling film. The casting’s spot on and despite each character having a hint of the absurd, you can still buy in to them as they’re all very human. What’s best about this coming-of-age tale is that it captures the awkwardness of youth like you rarely see; even though these exact events didn’t happen, it’s all too easy to relate to the story, and Oliver. Despite bring painfully indie Submarine remains very watchable and entertaining for the duration.

Fulltime Killer: A couple of hitmen, ‘O’ and ‘Tok’, become intertwined in a battle to prove who is the best in Asia. Turns in to a bit of a ‘two hitmen and a cleaner’ story, and while the lady was central to the story, the film would have been much more exciting and faster-paced without all of the terrible characterisation scenes she facilitated. The narrator changes between the 2 killers for the most part, then a random crazy policeman towards the end – bizarre. There’s some very cool action & shootouts and it’s visually sumptuous in parts, although nothing’s really that memorable. Andy Lau’s the standout as the cocksure shoot-form-the-hip dangerman. While this film’s decent enough it never really takes off of goes into top gear, even with its Metal Slug inspired ending. For those that enjoy style over substance, this one’s ideal.