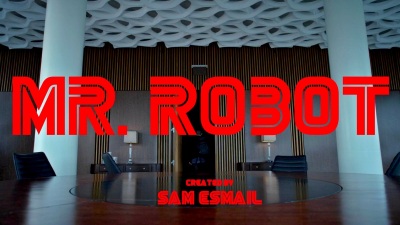 Mr. Robot [Season 1]: follows Elliot – a Cyber Security engineer by day / social vigilante hacker by night – as he’s recruited by a shady anarchist called ‘Mr Robot’. Firstly, the shows gambles everything on a wild main character: an anxious & depressed, socially inept, lonely, mentally unstable, and unsympathetic junkie-hacker! The central plot is told through his paranoid point-of-view, where we hear his thoughts – including some beautiful IT snobbery: “he owns a blackberry” “he likes the music of Josh Groban” / “stupid Marvel movies”. While Malek’s lead performance is outstanding, he’s not alone as the entire show is very well-cast: everyone has a unique look and set of traits & skills – Wallstrom and Slater in particular get a lot of time to shine. The show also looks phenomenal; it’s beautifully shot with lots of bold & striking imagery, vibrant colours, and unorthodox camerawork; like low-level & asymmetrical shots, strong leading lines… you could screenshot almost any moment and hang it on your wall. In fact, the production is so slick that it feels more like a 10-hour long movie. Every character, every sub-plot, almost every scene feels like it’s saying something about our modern way of living; how insipid tech is permeating our lives, and how ‘the masses’ are being exploited. As someone who works in IT I found myself nerding out over accuracy and tech savviness of the show; Hell, even the episode titles like “eps1.0_hellofriend.mov” are smart and cool. As the season marches forward viewers are rewarded with compelling story arcs, Shakespearian twists and turns, and scathing critiques of modern life, big business, & corporate culture. It’s very anti-establishment, and isn’t dumbed down in the slightest. Insightful, intelligent, and crammed with current issues & ‘news story’ plots, Mr Robot is the kind of show that’s setting the bar in terms of style and substance. 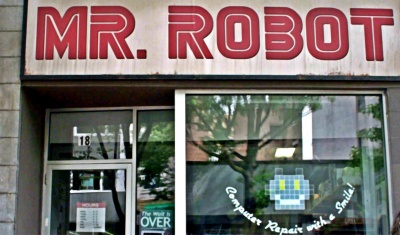 Audition (オーディション, Ōdishon): a TV producer and widower stage a fake TV audition in order to find the latter a new wife, but the best candidate seems too good to be true. The opening half hour feels a little too rom-com-y for a ‘horror’ film (upbeat music, cheesy jokes etc). The film trudges on and after 1hr 15m of setup it gradually becomes weirder and more interesting until the payoff semi-ending finally kicks in. Knowing that there’s something not quite right with the ‘perfect girl’ is a tad unsettling, but you couldn’t have predicted an ending as extreme as this – the sound of bone being sawed is vomit-inducing! There’s a small, but obvious social critique about the time in lines like “The whole of japan’s lonely”, and “Japan is Finished” – not-so-subtle! What makes this worthwhile is that it is a unique horror film in that is doesn’t pander to conventions, or give you what you expect. It also beat the wave of late 2000s movies that kick-started ‘torture porn’/’Splatter’ craze again. As original and unique as Audition is, it’s essentially a psychological drama for this most part with 10 minutes of gore capping off a lot of humdrum!

Black Swan: when a devoted ballet dancer finally gets featured in the lead role of Swan Lake she has to deal with all the pressures that drove her predecessor crazy. To get it out of the way, nobody does ‘descending into madness’ quite like Aranofsky – and this is no different in that you genuinely have no idea if what your seeing is real, unreal, paranoia, hallucinations, fantasy, or mental illness. The second half on the film in particular has some genuinely chilling and thrilling scenes. To begin with the camerawork feels awkward and unnecessary – walking shots behind the heads – but it works surprisingly well for most of the film – particularly when it starts spinning around the dancers. The film also uses SFX outstandingly, and wiping out the cameramen in the reflections gives the viewer a strange haunting sensation. The new-age classical soundtrack is nothing short of stunning. Although I wasn’t convinced by the first 40 minutes, seeing the complex relationships (mum, teacher, peer) develop is thoroughly enjoyable, particularly because the film always keeps you guessing. Cassel and the Hershey both give show-stopping performances, although they’re overshadowed by Portman who puts everything out there, and becomes the definition of fragile, slowly and believably transforming into a woman on the brink of madness. Don’t understand the big deal around theater walk outs – it’s definitely not for the prudish, but there’s nothing offensive here. Despite everything in front of the camera being golden, the real star is the man behind it, who gets everything pitch perfect and creates an absolutely stunning finale. Ballet’s never been this sexy and dramatic.